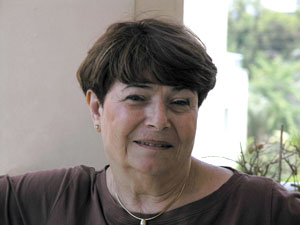 Carmela Ramati is a sculptor who matured slowly. She began her professional practice only after an extensive carrier in the field of children education. Through small-scale sculpture, she seeks to illuminate issues regarding her being a woman, a mother, and a grandmother: the woman body, love, relationships, and motherhood.

Carmela creates her figurines with clay first. She shapes, adds, subtracts, bends and polishes. The outcome is generally cast in bronze, sometimes in stone (stone powder processed as a cast material). The figures are women figures; men are present only in the context of women. These women are independent, daring, and self-confident. Alone, they lack any sense of loneliness or boredom. They lie down with pleasure, or expose their naked body to the sun, or exercise sport and dance activities.

The sculptures featuring several figures have to do with the central and close circle of the woman, according to Carmela Ramati: the mate, the child, and other women. The relationships with the mate and the child are designed as symbiotic, inseparable, raising from each other and folding upon each other. In her sculpture "The Kiss" (2002), for example, the man and the woman share the same arms, and in "Mother and Child" (2001), the child is embodied into the mother, almost as the embryo in the woman's womb, in the work "Conception" (2004). The other women are designed as close friends, sharing the same faith and destiny. The work "Homage to Matisse" (2005) shows them as very similar, almost identical, holding hands to create a closed circle, a symbol of sisterhood and harmony.

Two additional groups of works stand in the heart of the artist's creation: animals (mostly birds) and children. The birds are representations of freedom, of the capability to dream, and to fly to unknown horizons. In the sculpture "Courting" (2004), two doves are shown courting as a metaphor to lovers, illustrating the expression "loving as a couple of doves". The children figures celebrate the innocence and joy of life. The circle, a symbol of completeness and harmony, is also present in these works ("Naughtiness", 2002, "The Rope Skipping", 2002), as well as the desire to fly ("The Sky Is the Limit", 2004).

The style of Carmela is figurative, descriptive, one that tells a story. We can observe a transition from a realistic approach, in the early works, to a more abstract one in the later, giving up on details in behalf of the gesture, the dynamic movement and the flow. But this is not a one directional process, from the figurative to the abstract, as in many of the Modern artists' works. It is rather an expression of the artist's different states of mind, and her constant seeking after new ways of creation. We may well expect the shift, back and forth, between these two poles of Sculpture, to characterize the work of Carmela Ramati from now on.